The RewriteRails plug-in adds syntactic abstractions like Andand and String to Block to Rails projects without monkey-patching. All of the power and convenience, none of the compatibility woes and head-aches. 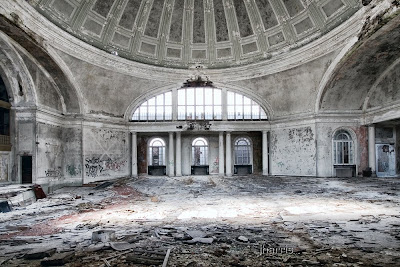 For more information, read A Difficult Distraction and Why I Write Concept Software. Also, Forgotten Detroit has more interesting pictures like this.

If you're already using gems like Object#andand or String#to_proc, RewriteRails is absolutely for you. You can continue to do what you're already doing, but your rails code will be faster and you will never have to worry about some gems conflicting with each other and with ActiveSupport as it grows.

If you have considered using Object#andand or String#to_proc, but hesitated because you are worried about encumbering classes like Object and String with even more methods, RewriteRails is for you. You get to use these powerful constructs without monkey-patching. You read that right. RewriteRails is a No-Monkey-Patching Zone.

If you want the power and convenience without the head-aches. RewriteRails is for you.

What language features does RewriteRails support?

Do we really have to go to all the trouble of rewriting code to support these features?

Some of rewriters--such as Into and Extension Methods--could have been implemented by opening core classes and monkey-patching, but implementing them as rewriters means that you have higher performance and fewer conflicts with existing code.

Some of the rewriters--such as Andand and String to Block--have better semantics when implemented using rewriting instead of opening classes.

And some of the rewriters--such as Call by Name and Block Anaphora--simply cannot be implemented without rewriting code.

How does it work?

Install the RewriteRails plugin in your Rails project and the gems ParseTree and Ruby2Ruby (in your system or frozen into your project). You can write ruby files as usual (e.g. foo_bar.rb), and things will work as usual. You can also have RewriteRails rewrite Ruby files for you. Any file with the suffix .rr will be "rewritten."

RewriteRails takes your .rr files and scans them with rewriters. Each rewriter looks for a certain kind of Ruby code and rewrites it into another kind of Ruby code. This produces the same effect as a C Preprocessor, a C++ template, or a Lisp Macro.

RewriteRails also tells Rails to look in the rewritten folder for your code, so you don't have to move anything around, it's as if Rails is reading your .rr files directly.

So is a .rr file something like an erb or haml template?

Yes. And also No. Yes, it is like a template in that it is turned into a .rb file that Rails executes. But no in that you won't find a bunch of special directives or any other trappings of a "template language." .rr files are Ruby files, they look like they use a bunch of monkey-patched extensions, but RewriteRails rewrites them so that they only use Standard Ruby.

If you would like a metaphor, imagine that you embrace syntactic abstractions like #andand, but you have a colleague who dislikes monkey-patching intensely, so much so that every time you write some code like:

Your colleague "fixes" it by rewriting it to:

The good news is that while your colleague's rewriting destroys what you originally wrote, RewriteRails leaves your .rr files just the way it found them. So with RewriteRails, both you and your colleague can get along just fine.

How can I see what is rewritten?

After you write a .rr file, you can run your code in the normal way: script/console, script/server, or best of all rake test :-)

As mentioned, RewriteRails will place a .rb in the rewritten directory for each of your .rr files and you can open them up in a text editor. Like any generated file, you should not edit the rewritten files.

How do I debug .rr files?

Very carefully. At this time, the rewritten file does not contain any blank lines or comments, and obviously some of what you wrote is rewritten into a different form. As a result, the code you write may be on line 42 in your .rr file but end up on line 23 in the resulting .rb file. This can be tedious if you are dealing with a lot of errors and like your IDE's ability to jump right to the offending line of source code.

TODO: Perform a little diff magic and modify each .rb file so that as many lines of code as possible end up on the same line number as in the original .rr file.

My colleagues don't mind me writing .rr files, but they prefer .rb files. What do we do?

In other words, you can write .rb files whenever you want and as long as they are in Rails' standard directories, they will behave exactly as you expect. You can mix .rb and .rr files as much as you like.

I like this for development, but I don't want to install all those gems on my server

Now when you run your project in production, the .rr files will not be rewritten on the fly, but Rails will continue to find the rewritten .rb files in the rewritten directory. You don't have to do anything else, you won't need ParseTree, Ruby2Ruby, or RewriteRails on your production servers.

Why is this better than the rewrite gem?

First, it's better for you tomorrow. If in the distant future there is some problem that breaks Rewrite (like changes to its dependencies or to MRI), you have your .rb files intact and working.

Second, it's better for you today. If someone else goes wild with monkey-patching, it won't break any of your rewritten code.

Sounds great! Are there any issues I should know about before jumping in with both feet?

How does this differ from the old rewrite gem?

Do I have to run any rake tasks?

No, RewriteRails rewrites your .rr files on the fly. However, you may wish to run rake rewrite:prepare whenever you wish to inspect what the resulting code will look like without running it. It also might be a nice ides to run it before checking code in, just to be 100% sure your repository has a complete set of the latest .rb files.

That was fun, but we hired a new architect who has decided make his mark by criticizing all of our decisions and insists we stop all new development while we migrate RewriteRails out of our million line project. Are we fuxxored?

Adding a new smartest guy in the room might fuxxor your project for other reasons, but your code is safe with RewriteRails. Run:

This does the prepare task that rewrites all of your code, but instead of placing the resulting .rb files in a hierarchy in the rewritten folder, it places them in your project right next to the .rr files. You can now remove the RewriteRails plugin and your project will work just as if you had never used it. (Removing the out-dated .rr files from the command line shouldn't be a problem for anyone who values removing technical debt enough to stop all new development.)

The summary is that you can experiment with RewriteRails as much as you like, but you are not painting yourself into a corner. You can escape to standard Ruby at any time. In fact, RewriteRail is all about Standard Ruby. The whole point of the plugin is to always maintain your code using Standard Ruby, it's just that RewriteRails lets you use powerful idioms to write standard ruby code.