Stringer has no external dependencies, no social recommendations/sharing, and no fancy machine learning algorithms.

But it does have keyboard shortcuts and was made with love!

Stringer is a Ruby (2.3.0+) app based on Sinatra, ActiveRecord, PostgreSQL, Backbone.js and DelayedJob.

Stringer will run just fine on the Heroku free plan.

Instructions are provided for deploying to Heroku manually, to any Ruby compatible Linux-based VPS, to Docker and to OpenShift.

You can access the keyboard shortcuts when using the app by hitting ?.

Using your own domain with Heroku

You can run Stringer at http://reader.yourdomain.com using a CNAME.

If you are on Heroku:

Go to your registrar and add a CNAME:

Wait a few minutes for changes to propagate.

Stringer implements a clone of Fever's API so it can be used with any mobile client that supports Fever. 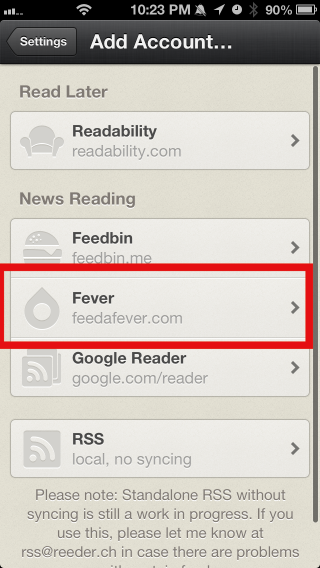 Use the following settings:

If you have previously setup Stringer, you will need to migrate your database and run rake change_password for the API key to be setup properly.

Stringer has been translated to several other languages. Your language can be set with the LOCALE environment variable.

To set your locale on Heroku, run heroku config:set LOCALE=en.

If you would like to translate Stringer to your preferred language, please use LocaleApp.

If you are on the Heroku free plan, there is a 10k row limit so you will eventually run out of space.

You can clean up old stories by running: rake cleanup_old_stories

By default, this removes read stories that are more than 30 days old (that are not starred). You can either run this manually or add it as a scheduled task.

Run the Ruby tests with rspec.

Run the Javascript tests with rake test_js and then open a browser to http://localhost:4567/test.

To get started using Stringer for development you first need to install foreman.

Then run the following commands.

The application will be running on port 5000.

You can launch an interactive console (a la rails c) using racksh.

Most of the heavy-lifting is done by feedjira and feedbag.

If you have a question, feature idea, or are running into problems, our preferred method of contact is to open an issue on GitHub. This allows multiple people to weigh in, and we can keep everything in one place. Thanks!