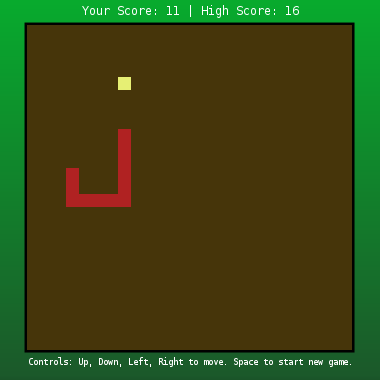 There's a snake in my shoes!

This is a Snake game I made to learn Shoes and use Ruby outside of Rails.

Special thanks go out to my little cousins for testing the early, early versions of the game when I barely had the snake running around. Also to my roommate for debugging (desnaking?) the app with me and making me realize that I'm a dumb programmer.

I hate snakes! Why does it always have to be snakes!?

To get it running, point your shoes binary at app.rb. This is currently tested on Ubuntu, and I'll get around to testing it on XP and OSX soon.

My personal high score is 76. Then again, the game is REALLY slow by that point, but hopefully that will be fixed in the future. If you get higher, email me a screenshot at nick@quaran.to and I'll update the highscore file.