Note: the original TicGit author has pulled all the TicGit-ng changes into his repository, creating a potentially confusing situation. The schacon TicGit repo, this one, is not consistently maintained. For up to date TicGit-ng info and code, check the canonical TicGit-ng repository at
https://github.com/jeffWelling/ticgit

This project provides a ticketing system built on Git that is kept in a separate branch in your projects Git repository. Originally called TicGit, it is now known as TicGit-ng to continue development and avoid namespace clashes.

TicGit-ng is a simple ticketing system, roughly similar to the Lighthouse model, that is based in git. It provides a command line client that uses the ‘git’ gem to keep its ticketing information in a separate branch (called ‘ticgit-ng’) within your existing git repository. All the data is file based and rarely changing, decreasing the likelihood of a merge issue. Right now, ticket branch merges need to be done manually and separately, but work is being done on a ti sync command to make this easier and more intuitive.

The idea is that it keeps your tickets in the same repository, but without mucking up your working tree. By using its own seperate branch to store its information it keeps the working trees in all your other branches untouched.

There are two interfaces available, the command line ti command and the ticgitweb web interface, though ticgitweb has many more prerequisites than ti.

It will automatically create the new branch the first time you use it, and it caches all the data (another working directory and index file) in your ~/.ticgit-ng directory by default. If you delete that directory, it will just create it again the next time, you will lose no data (except some of your saved preferences).

TicGit-ng is currently using itself to store its feature requests and bug reports.

There are two sets of prerequisites, those for people who intend to just run ti, and another set for those who wish to run ticgitweb as well. ticgitweb has additional dependancies that aren't required for ti's use.

To install these packages on a Debian system, or a Debian based system like Ubuntu, do

To install these packages on a Debian system, or a Debian based system like Ubuntu, do

A Note about rubygems

While the version of rubygems available from the repositories on Debian 5.0.5 stable will work just fine for using the command line ti program, using ticgitweb requires some extra effort. Older versions of rubygems, such as the one available on Debian 5.0.5, will not work out of the box with the new gem repositories because the .deb in stable relies on rubyforge rather than rubygems for its operations. See this bug for an example. If you are running an older version of rubygems, you may need to get the latest rubygems package from http://rubygems.org/ or apt pinning before being able to properly install the git and ticgit gems.

A Note about the git gem

If these annoy you as they do me and you've set up apt pinning, you can do

And those notices should go away.

Installation on a Debian stable system. Note that the command line interface for TicGit-ng can be run from Debian stable, but some of the gems required for the web interface may require you to use apt pinning to run without errors. See below

To install TicGit-ng on your system, you can go one of two ways,

or, you can install it from source by downloading this repository building your own gem (see below).

To get a list of all commands with short description:

To get help about a specific command:

The available commands are:

The first time you use any command in Ticgit-ng, it will create a new branch in your repo called ‘ticgit-ng’ and setup a caching area in ~/.ticgit-ng.

If you run it without arguments, it will tell you what is available to run

To add a new ticket you can use ti new -t 'Title of ticket' and give it a title in one command line.

For the ‘comment’ and ‘new’ commands, if you don’t specify a ‘-m’ for the message, it puts you into $EDITOR to write it. The ‘new’ action is especially useful with this, because you can also tag it and give it an initial comment when you create it this way:

To edit a ticket, such as assigning a tag to the new ticket we created, we first checkout the ticket and then use ti tag. Always checkout the ticket you intend to edit. Some commands allow you to include a tic_id argument but that can get confusing to keep track of and most of the time several edits will be done to the same ticket anyway, so it is suggested you use ti checkout for convenience if nothing else.

To change the state of a ticket, such as to change it from 'open' to 'hold' or 'resolved', use ti state. There are 4 valid states: hold, invalid, open, and resolved.

Dramatic Gasp! Where did all of our tickets go? Don't worry, this isn't a bug and your tickets aren't gone.

By default ti list doesn't show tickets with a state of 'hold', so we have to specify that we want to see those tickets with an argument. Now you can see, out ti state hold command changed the state of that ticket to on hold. This can also be done without checking out the ticket by using ti state 1 hold.

Where ticgit expects a ticket id, it will take either the number of the ticket on the last ‘list’ you did, or it will take the partial sha each ticket is assigned when it is created – that number never changes for the life of the ticket, even across repositories, so you can email that number to someone else working on the project so they can identify it. If nothing is specified, it will use the currently checked out ticket.

ti show also has a '-f' argument to be able to see comments that are longer than 3 lines, which would normally be truncated.

The ti list command can also be sorted and filtered.

So if you wanted to see a list of all your tickets that have the ‘feature’ tag, assigned to ‘jeff.welling@gmail.com’ and are ‘open’, ordered by date opened descending, and save that view as ‘not_mine’, you can run this:

Then if you want to later list tickets with the same options as you used above, use

If you have cloned a repository and would like to get the ticgit-ng branch for that repo (presuming they have one), do this.

To download your own copy of the TicGit-ng ticgit branch after cloning the repo, so that you can add or alter a bug yourself, follow these instructions.

This will show you all of the bugs in TicGit-ng's ticgit-ng branch.

To submit your changes back to the upstream maintainer, push the bugs in your ticgit-ng branch to your public repo on Github

Then contact the upstream maintainer by sending a Pull Request or Email and ask them to review and accept your bug changes.

Sharing your tickets with others

If you host your repositories on Github as I do then this process is simplified some because you don't have to worry about hosting your repository somewhere where other people can access it to pull your ticgit-ng branch.

For example, when I want my friend wnight to have the changes I made to my tickets in my ticgit-ng repository, I do a

to update all my remote branches with my current ones, and then I ask him to do a

to pull my changes into his ticgit-ng branch and then switch back to his master branch. Now when he does ti list it will show the changes I made to the tickets on my system.

Incorporating other peoples changes into your ticgit-ng branch

The process is much the same as above, except the rolls are reversed. Once you know they have published their changes and you have a URL to do a git pull from, you simply do

Replacing SOURCE_URL with the URL you were told to pull from, now you can see the changes they made, in your ticgit-ng branch. You can easily publish these changes with a git push origin so anyone following your work can also see these changes.

Changes made by Bruno Santos to add a ti sync command were integrated on February 15th 2011. You can now use the ti sync [options] command to sync your tickets with anyone else you've added with git remote add. To use ti sync, all you need to do is first make sure you've already added the remote source with git remote add, and then do

if you want to pull their tickets into your ticgit-ng branch without pushing your tickets to their branch.

To run the Sinatra enabled web UI for your TicGit-ng repo, simply cd to your repository and run 'ticgitweb', or 'ticgitweb -p 3456' to change the port to something other than '4567', which is the Sinatra default. 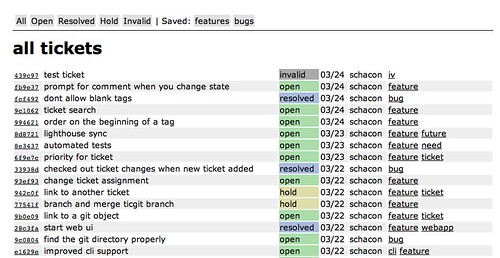 And here is an individual ticket: 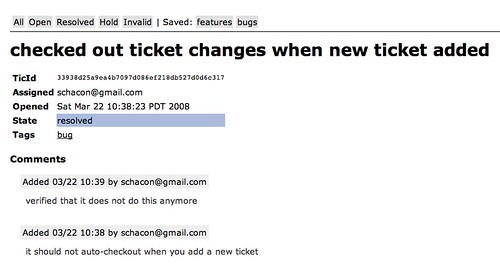 The original author had used rspec to write specs for ticgit-ng, but one of the maintainers since then switched it over to bacon[1][2][3] and I haven't been too inclined to switch it back.

To install the prerequisites on Debian stable for testing ticgit-ng, you will need apt pinning.

To test your version of ticgit-ng, go to your ticgit-ng directory and run

To create a gem from your development copy of ticgit-ng, go to your ticgit-ng directory and do

This will create a pkg/ directory, which will contain a newly created ticgit-ng gem for you to install.