Tool for creating sketches of physics problems in terms of Python code.

Pysketcher can typically be used to draw figures like Such figures can easily be interactively made using a lot of drawing programs. A Pysketcher figure, however, is defined trough computer code. This gives a great advantage: geometric features can be parameterized in terms of variables. Geometric variations are then trivially generated. Also, complicated figures can be built as a hierarchy of simpler elements. The figure can easily be made to move according to, e.g., a solution of a differential equation.

Here is a very simple figure that illustrates how geometric features are parameterized by variables (H, R, L, etc.): Another major feature of Pysketcher is the ability to let the sketch be dynamic and make an animation of the time evolution. Here is an example of a very simple vehicle on a bumpy road, where the solution of a differential equation (upper blue line) is fed back to the sketch to make a vertical displacement of the spring and other objects in the vehicle. View animation (the animation was created by this Pysketcher script). 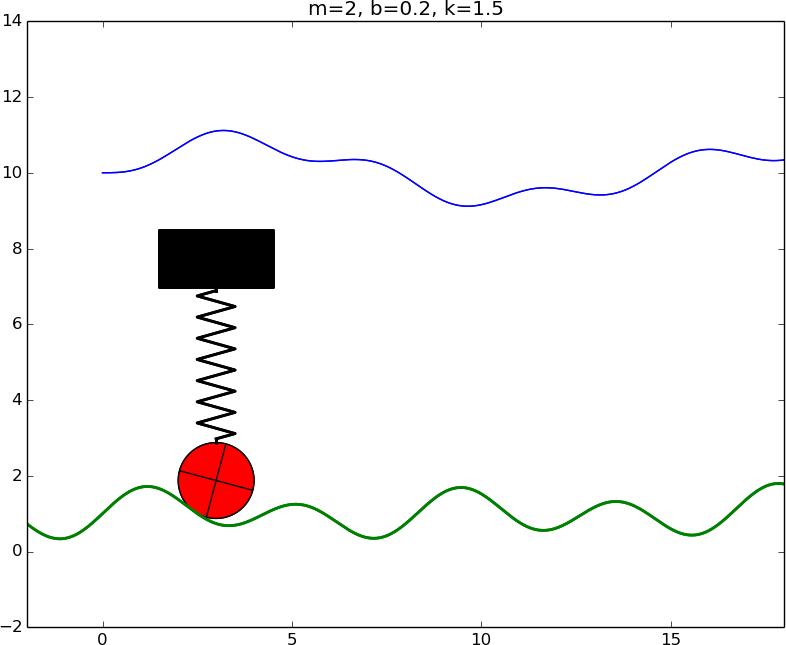 For an introduction to Pysketcher, see the tutorial in HTML, Sphinx, or PDF format (or a simplified version of the tutorial in Chapter 9 in A Primer on Scientific Programming with Python, 4th-5th edition, by H. P. Langtangen, Springer, 2014-2016).

See the examples directory for some examples beyond the more basic ones in the tutorial. For example, an elastic beam can be sketched as The sketch was created by the program examples/beam2.py.

Here is an illustration of the idea of numerical integration:

As shown in the figure-generating program examples/integral_comic_strip.py, this illustration can easily be turned into an XKCD type of comic strip:

Pysketcher applies Matplotlib to make the drawings, but it should be quite straightforward to replace the backend MatplotlibDraw.py by similar code utilizing TikZ or another plotting package.

The core of the Pysketcher software is a thin layer basically constructing a tree structure of elements in the sketch. A lot of classes are offered for different type of basic elements, such as Circle, Rectangle, Text, Text with arrow, Force, arbitrary curve, etc. Complicated figures can be created by sticking one figure into another (i.e., hierarchical building of figures by sticking one tree structure into another).

Pysketcher is pure Python code and works with Python version 2 and 3. Just do the standard

If you use Pysketcher and want to cite it, you can either cite this web site or the book that has the original documentation of the tool.

Pysketcher was first constructed as a powerful educational example on object-oriented programming for the book A Primer on Scientific Programming With Python, but the tool quickly became so useful for the author that it was further developed and heavily used for creating figures in other documents.