Dist::Zilla::App::Command::dumpphases - Dump a textual representation of each phase's parts.

If you are using an HTML-enabled POD viewer, you should see a screenshot of this in action:

( Everyone else can visit http://kentnl.github.io/screenshots/Dist-Zilla-App-Command-dumpphases/example_01.png ) 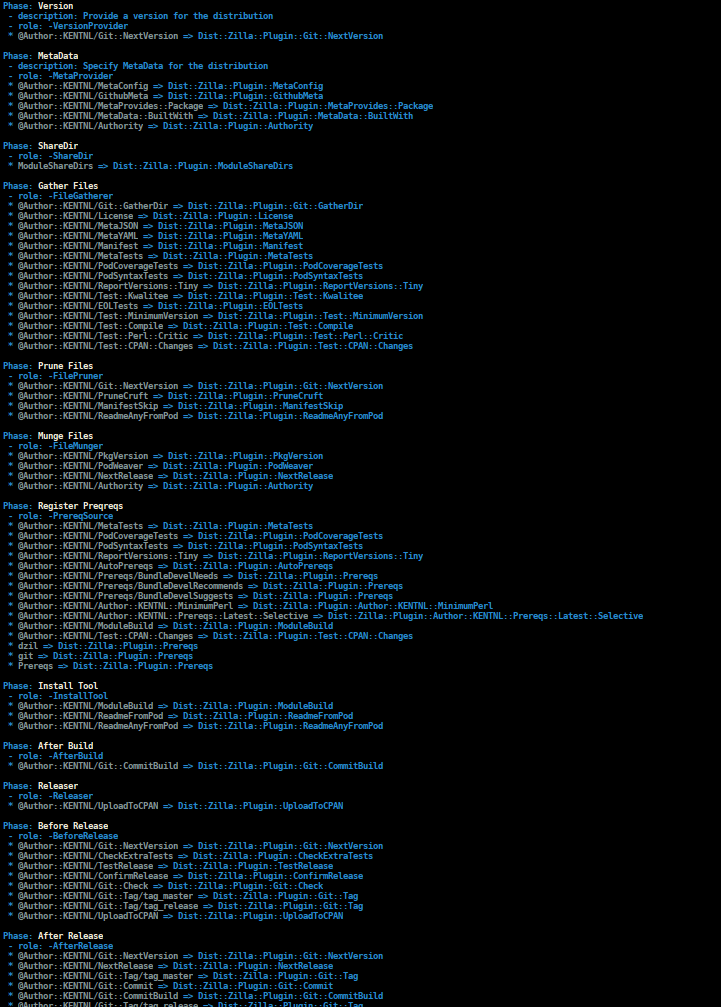 Working out what Plugins will execute in which order during which phase can be a little confusing sometimes.

This Command exists primarily to make developing Plugin Bundles and debugging dist.ini a bit easier, especially for newbies who may not fully understand Bundles yet.

If you want to turn colors off, use Term::ANSIcolor's environment variable ANSI_COLORS_DISABLED. E.g:

Alternatively, since 0.3.0 you can specify a color-free theme:

Technically speaking, this utility deals with more than just "phases", it will in fact dump all plugins used, and it will in the process of doing so, dump things that are part of the clearly defined "phases" that occur within Dist::Zilla.

However, if you want to be pedantic, and understand how Dist::Zilla works, then you must understand, many of the things this module calls "phases" are not so much phases.

At its core, Dist::Zilla has an array, on which all Plugins are stored.

A Plugin, in itself, will not do very much ( at least, not unless they do instantiation-time changes like [Bootstrap::lib] )

There are 3 Primary kinds of plugin

This App::Command command will indeed list all of the above, but for the sake of ease of use, the "Third kind" is informally under the umbrella of a "phase".

This command takes one optional parameter

This software is copyright (c) 2017 by Kent Fredric kentnl@cpan.org.

This is free software; you can redistribute it and/or modify it under the same terms as the Perl 5 programming language system itself.