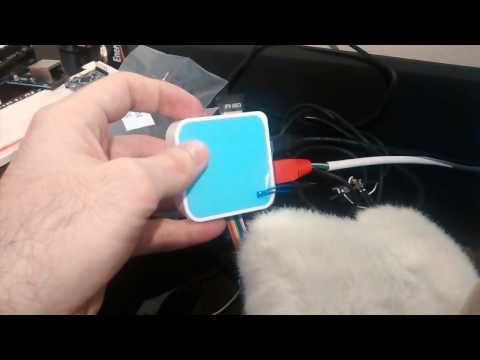 This is designed to interface with toys that run on batteries. The device uses a NRF24L01+, set with a very specific destination address, on channels 37-39, which happen to overlap with some of the Bluetooth LE spec.

By configuring the radio to ignore stock (Nordic) crcs, and by implementing the BTLE CRC and whitening algorithms, we can interpret legitimate beacons and respond to them.

See the schematic_eagle folder for my first attempt at a schematic ever.

I use OpenWrt on a TP-Link WR703N plus an inexpensive Bluetooth 4.0 dongle.

Combine this with an HTTP interface on an xinetd script and you have an API!

See openwrt_setup for more details on this. Having a dedicate computer that can respond to requests to generate beacons is cool.

Once you have server, you can emulate the Audubon Singing Bird Clock!