PicoAVR is an open source AVR development board which aims to a minimalistic but fully functional alternative to Arduino. The PicoAVR board measures less than 1 square inch, and for less than 10$ you can buy all the components to build your own. 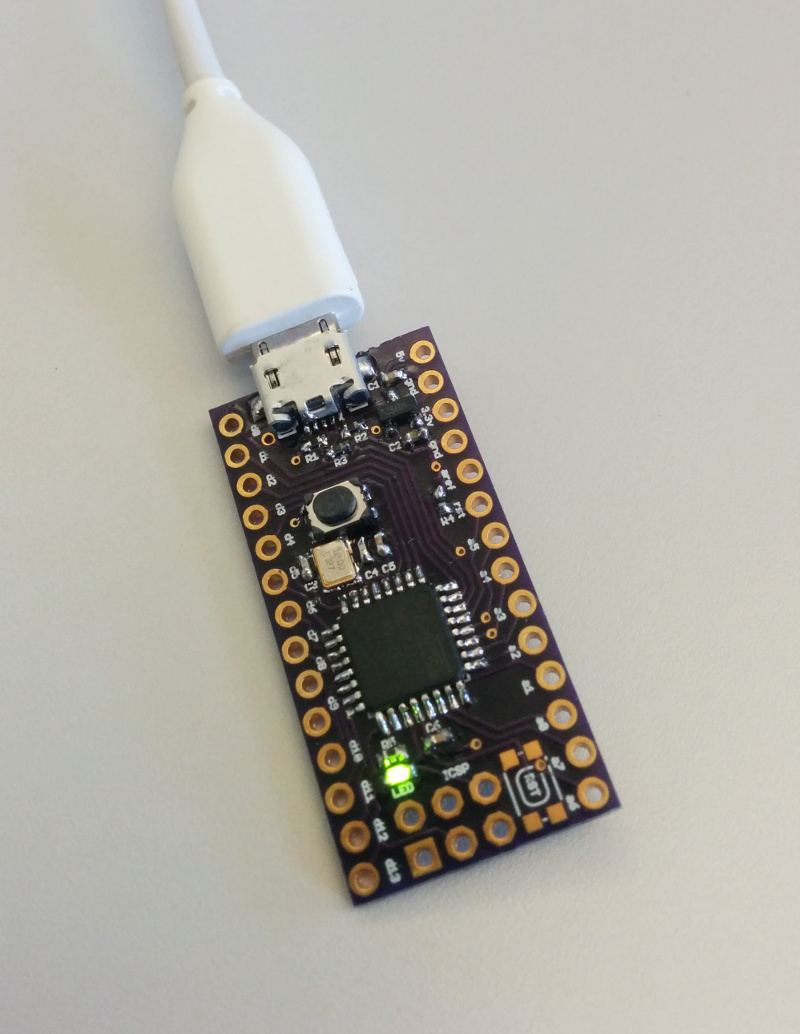 The PicoAVR can be powered and programmed through a standard MicroUSB connector, the same connector used by android phones and tablets. PicoAVR uses the V-USB software implementation of the USB stack, and when connected to your computer can easily be programmed to emulate a keyboard, mouse or any other HID device.

The PicoAVR board is similar in capabilities to the Arduino UNO, Arduino Micro or the Arduino Leonardo, but by using an atmega328p and V-USB instead of an FTDI chip or an atmega328u4 the number of components and the cost of the PicoAVR is significantly reduced.

Since PicoAVR uses the same protocol as the usbasp for programming, it is supported by the latest versions of avrdude. As a result both Atmel Studio 6 or the Arduino Software can be used as complete development environments for the PicoAVR. However, you are not constrained to these, and you can easily develop for the PicoAVR using avr-gcc, avrdude and the editor of your choice.

In its default configuration the PicoAVR runs at 12 Mhz and operates at 3.3 V, which makes it easy to interface to the newer 3.3 V devices without requiring a level shifter.

PicoAVR may be interesting to you if...

You can buy the components to build your own for less than 10$ per board.

Moreover, keep in mind that due to economies of scale, building 100 or 1000 PicoAVR's is significantly cheaper per unit than building a single board.

The only equipment required to build your own PicoAVR is a soldering iron and an ICSP programmer to flash the bootloader (more on that below).

The total comes to less than 6.5$ per board. Digikey offers educational and bulk discounts.

You can get 3 PCB's from oshpark.com for only 4.95$ including shipping. That is less than 2$ per PicoAVR board! Click here to order your own.

The eagle board files are available in the repository.

Below is a rendering of the top and bottom of the PCB.

To get the PicoAVR usbasp-based bootloader flashed into the AVR chip you will need either: a dedicated ICSP programmer, an Arduino and jumper cables, or an already functioning PicoAVR.